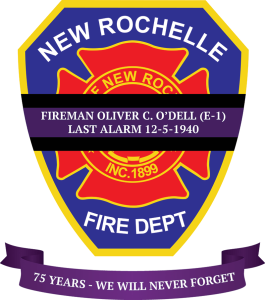 NEW ROCHELLE — 75 years ago today, Gertrude O’Dell collapsed to the ground as Fire Chief Oscar Grab informed her that her husband had died in the line of duty. Fireman Oliver C. O’Dell was killed “almost instantly” after landing on the sidewalk on his head when his 20-foot ladder slid from the ice-coated sidewalk in front of the Home Made Bakery at 351 North Ave. Unwilling to wait for an ambulance, his brothers raced him to New Rochelle Hospital in the Chief’s car, but he died eight minutes later, leaving his two young daughters, Dolores and Ellen, without their father.

“The City is losing a fine, upright citizen and also an important member of our nationally recognized Fire Department. His last act was in line of duty in behalf of our City and its citizens. I personally mourn his loss, the department must mourn a fine comrade and the City a heroic servant. This is a sample of the risk of life and limb daily faced by some of our workers” – Mayor Stanley W. Church 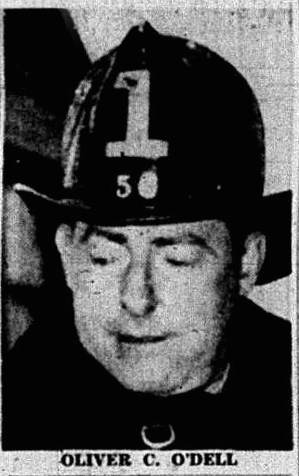 O’Dell was born in New Rochelle on March 31st, 1898. Just before his 23rd birthday, he was appointed New Rochelle Fireman #50, serving faithfully for almost 20 years. He lived with his wife and two daughters at 34 Pratt St.

O’Dell was assigned along with fellow Fireman Peter Blaney to open roof vents for ventilation of the cockloft. After their task had been completed, the two men began their descent down the ladder with Fireman Blaney going first and then O’Dell. Fireman O’Dell had one foot on the top rung when he began to swing his other foot around where he struck a guy wire that supported an old sign on the top of the building causing him to fall to the sidewalk on his head and fracturing his skull. 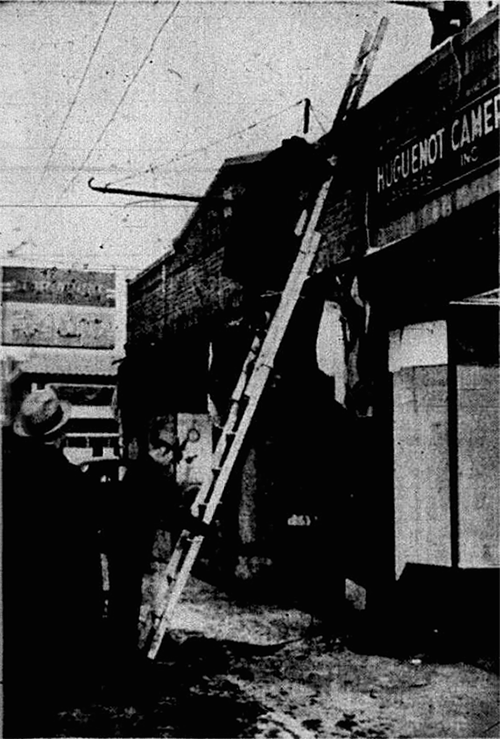 On the corner of Lawn Ave. & North Ave., it was Huguenot Camera, and more recently the old Del Pontes italian restaurant, before becoming Metro Pizza.